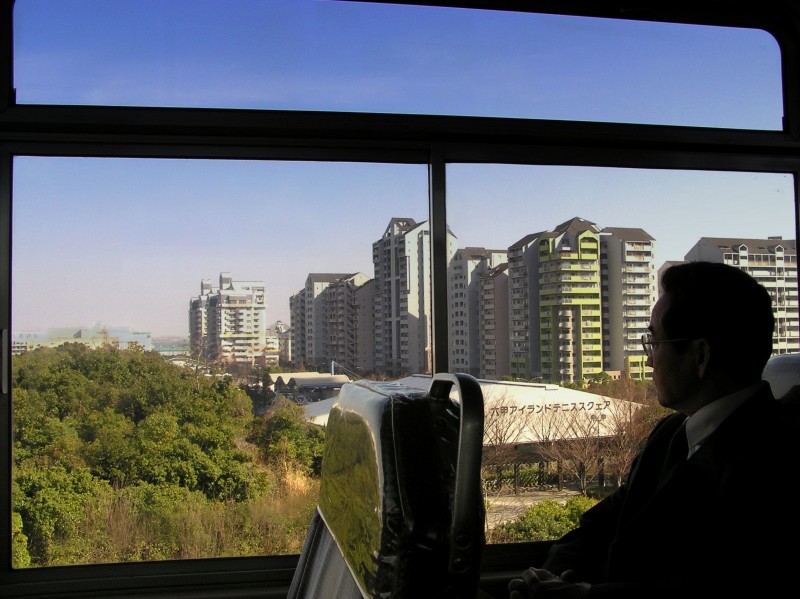 Taken on the Rokko Island monorail.

Nice in so many ways. The horizontal of the window frame nicely splits the blue in half, and the whole frame in the "rule of thirds". Similarly, there is an unseen line from the left at the border between the pink and blue of the sky, running all the way to the right along the rooftops, sweeping upward slightly. That works together with the line running from the top of the trees at the left, along the contour of the trees, and down to the silhouetted rider at the bottom right corner. Again, rule of thirds, plus the two lines work together like a "<" sign to funnel the motion of the picture to the left, which also conveniently happens to be the direction the man is facing and the train is moving. And having the whole name of the tennis pavilion show up with no characters cut off isn't a bad bonus either.

@Mike Cash: Cheers Mike! I'm glad you liked it. Thanks for your kind words.

Normally people would glue the camera to the window to get only the landscape. Adding the interior makes the shot quite a bit more interesting though. Really nice!

@Tkf15h: Thanks Tkf15h (can I call you Tkf for short?). I like taking shots like this, having a 'frame' for the scenery - trying to give the sense of what you really see.

i agree with tkf15h nice one

I love the black frame, it contains almost the whole shot. The passenger is the great subject for me. We can take his place and know how exactly he feels looking outside while he comes back home after work.

Very well framed, interesting shot and i agree with Mike, the splitting is wonderful. Not to forget crisp details. Great job pal.

Just browsed through your portfolio and its really impressive. Love your shots.

@Rahul: Thanks very much for visiting Rahul.

So cool and clear. What's the shutter speed here?

@Behrooz: Thanks Behrooz... don't know shutter speed; it usually displays it next to the image, not sure why it hasn't done this time...

Good one Daroru! Love the framing and the contrast between the man in the shadow and the landscape outside.

Looking outside, and dreaming, nice framing.

Good shot. A penny for his thoughts?

@frank: What do you reckon frank...? Thanks for the comment!

Looks like he's thinking about playing some tennis... Nice one!

Very nice shot, I really like the framing. He's probably think of the things he'd rather do then go to work on such a nice day.

I guess you have done a Save for the web instead of a Save as... That way the EXIF data would be lost.